“Train like you fight” as the saying goes. Every gun owner worth their salt spends more time off the range than on it, through dry firing, movement drills, and even small unit tactics. Safety is of course always a priority and even with we believe our gun is “empty”, it only takes one error in judgment for an easily fatal negligent discharge. This is one reason many shooters prefer to train with a “rubber duck” training weapon, red gun, laser dryfire training tools or other dummy weapons.

To that end, the folks at Armaments Systems & Procedures (ASP) have been developing reality-based defensive training tools for years to tackle this exact problem. Introducing, the ASP Red Gun H&K 416 training carbine, a new take on polymer training guns.

Feeling “Reddy” for Anything

While you might have heard of the “blue gun” training tool, this Red Gun was built from the ground up with modern materials and purpose-made for law enforcement tactical applications. 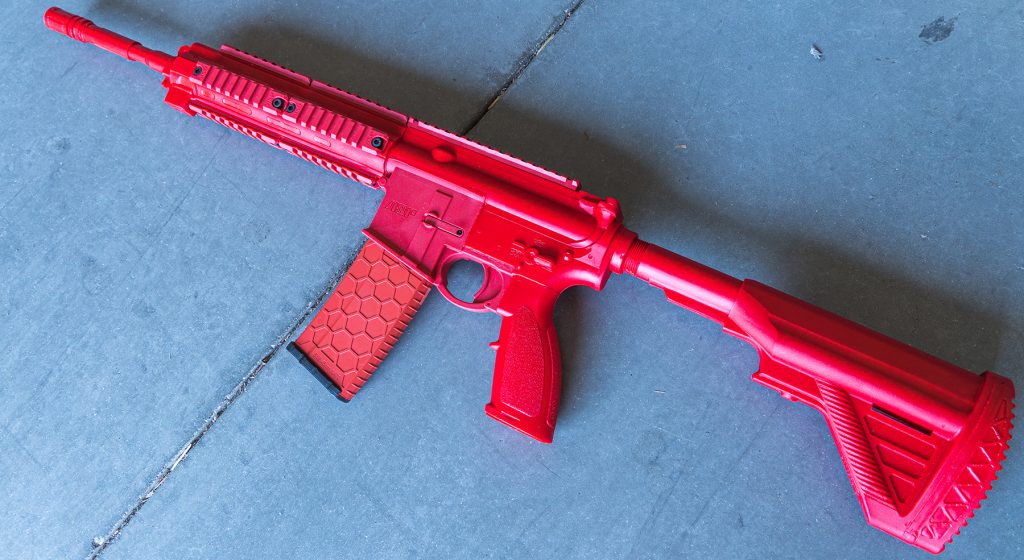 Unlike most training guns, ASP’s Red Gun is constructed with stronger reinforced polymer for repeated use and abuse in training environments. This makes the tool ideal for simulating combative encounters that may involve hard weapon drops or smacks across surfaces. While I certainly had not been conducting building drops with this gun, it certainly felt it struck the right balance between durability and weight savings.

Another unique feature of the Red Guns is the functional magazine release and catch. This particular model includes two AR-pattern Hexmag training magazines that feel exactly like the real thing. The only difference here is of course they are non-loadable. 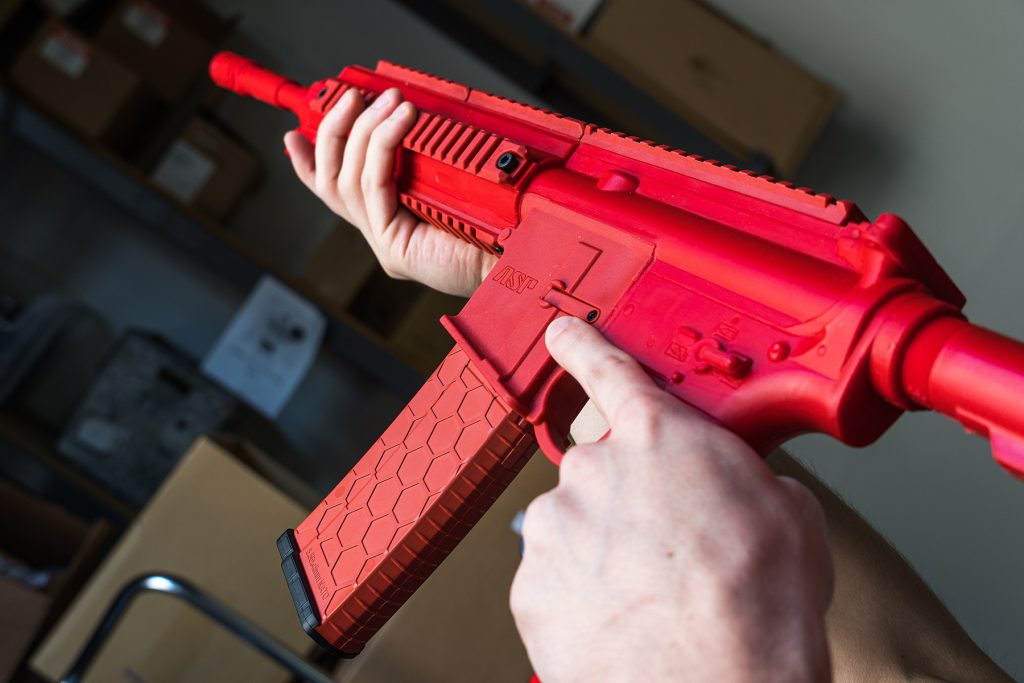 The ASP Red Gun H&K 416 is both lightweight and durable in construction. This holds true in such other versions of the new “enhanced” line as their AR15 training rifle and Beretta M9 trainer.

The Red Guns are also molded to the exact specifications and tolerances of their real-life counterparts. In this particular model, the Red Gun perfectly captures the shape of the H&K 416 from the grip down to the handguard and barrel. There is even a usable sling loophole in the stock.

Red Gun Functionality and Use

The look and feel of the tool is nice, but how does it perform when used practically?

The H&K 416 Red Gun does exactly as advertised, with a few minor hiccups. As mentioned before, the geometry and tolerances are so well replicated here that the Picatinny rails are actually fully usable. I was able to easily mount various red dot and holographic optics as well as a weapon-mounted light. While seemingly an insignificant feature at first glance, having the full use of the pic rails further immerses the user by giving them the option to mount the exact same accessories as they would in the field. The aforementioned sling loophole (along with the included front sling mount adapter) allows for…well a sling, arguably one of the most important accessories to your rifle. 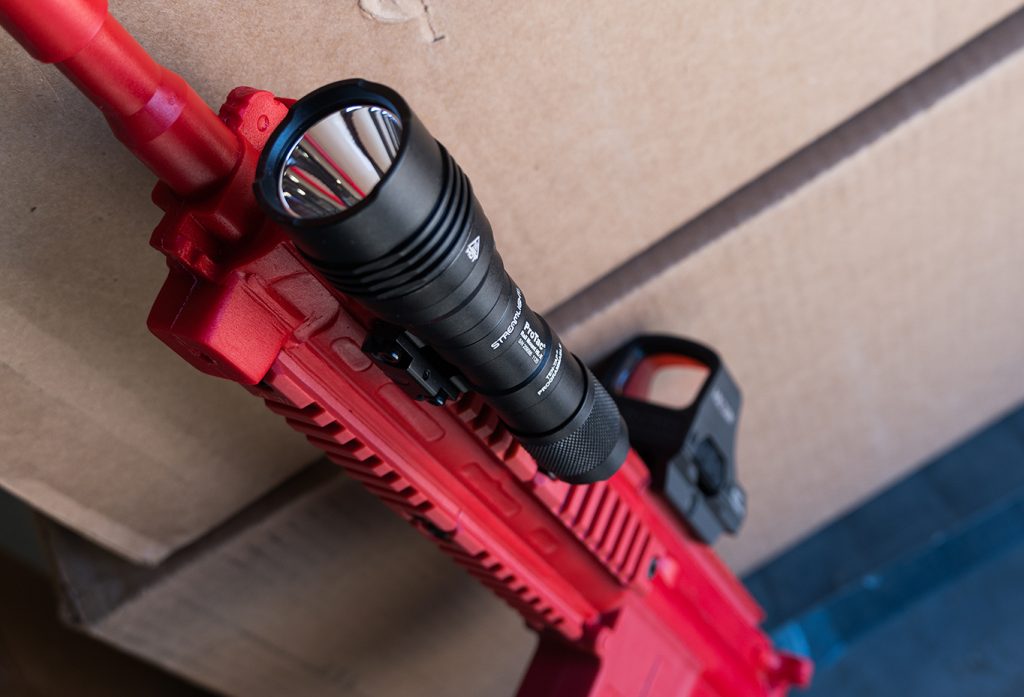 Streamlight ProTac and Holosun red dot attached to an ASP training gun for the HK416. You’ll see a similar nod to the value of this attachment system in another HK416 training gun article over on 50 Shades of FDE.

The magazine release and catch I have found that these work exactly as you’d expect, perfectly retaining and dropping magazines with ease. I literally could not tell the difference between my real AR and this Red Gun. As a matter of fact, you can even use real AR mags if you so desire. This goes without saying, but incorporating reloads into your training adds further realism and of course carries over to live fire.

The value of this feature cannot be overstated. 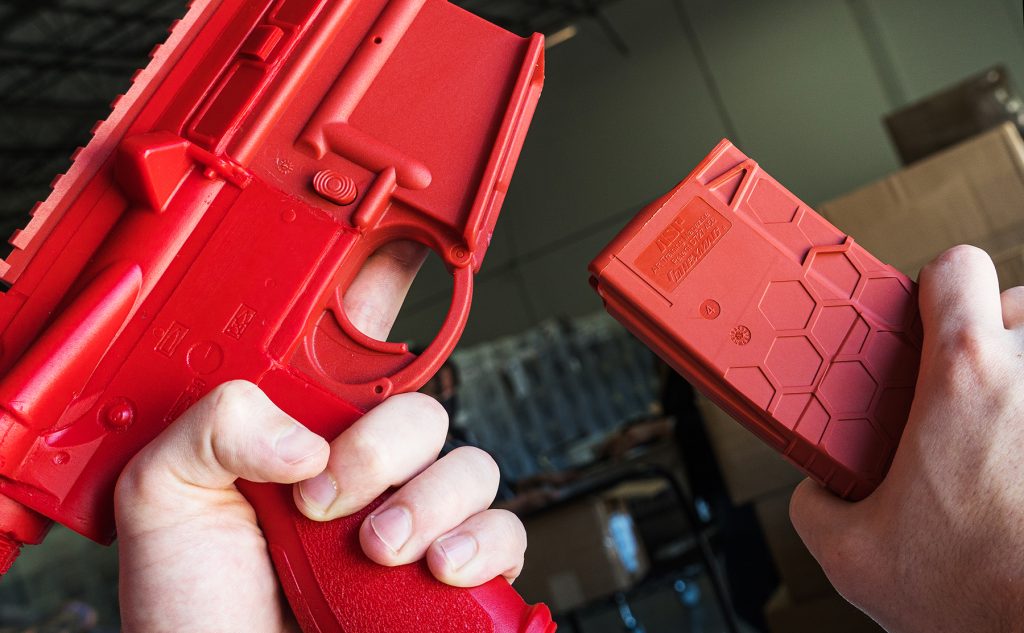 In terms of shouldering the Red Gun, I will voice a small complaint. The length of pull for the carbine is permanently fixed at its longest (usually four “clicks” out) configuration, due to its all-polymer construction. While for some larger individuals I’m sure this would be no issue, however, this is not how I set up any of my ARs. In fact, more often than not, my length of pull changes depending on if I’m standing or going prone and if I’m wearing kit or not. It’s certainly not the end of the world to shoulder the weapon at maximum length, but it is slightly uncomfortable. There is not any solution I can think of that could include an adjustable buttstock without sacrificing the all solid polymer construction. 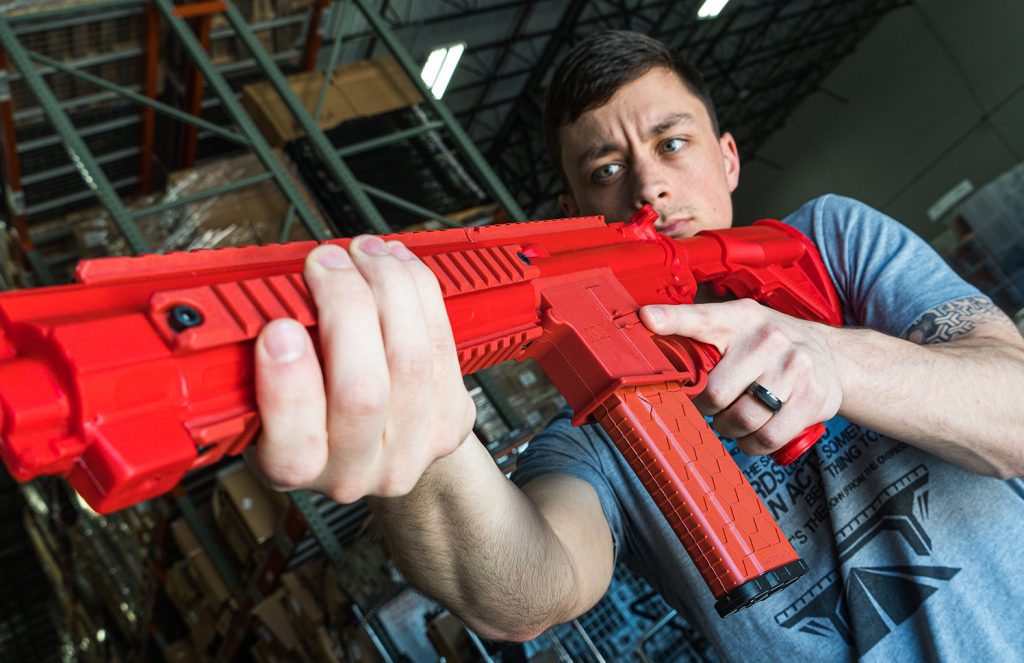 The ASP Red Gun’s rigidity lends itself to a consistent shoulder placement and cheek weld with the buttstock.

And while I do appreciate the fully usable Picatinny rails, I do wish there were some form of included front and rear iron sights. I am well aware that this Red Gun is a replica of a base H&K 416 without any sort of attachments, however, I do still think perhaps including detachable, screw-on Picatinny mounted sights would be very convenient for the user. After all, what good is simulating a firearm if you cannot convincingly aim at anything? It would be nice to have some capability of dry fire training, but incorporating such a feature into a dummy gun like this would likely be very difficult.

On the whole, the ASP Red Gun H&K 416 is an excellent training device and something I would highly recommend for anyone looking to do close-quarters firearms training. This is probably as close as you can possible get to replicating the real model without compromising on rigidity and safety. While I might have my minor complaints, ASP has more than delivered on the intended uses of this product. 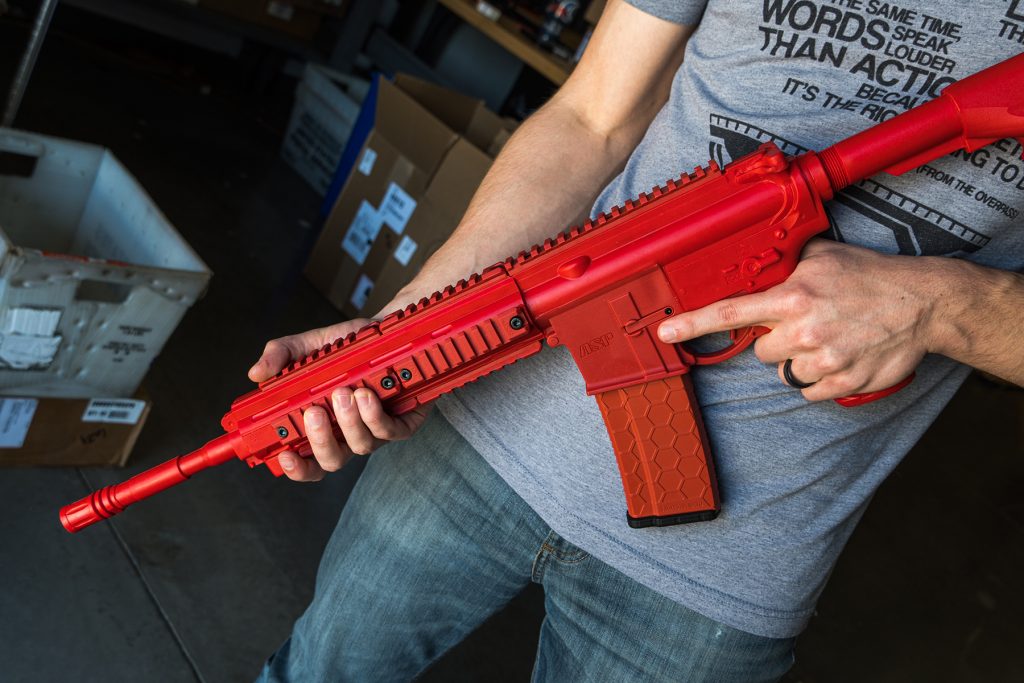