The Family Business: A Dystopian Shoot-out

Baen Books has released Mike Kupari’s latest novel, The Family Business. Its protagonist is a Federal “Recovery Agent” on the job in a much-changed United States of America hunting alien collaborators (from the invasion) and leftover aliens (still at large) while dodging apex xeno-predators lurking in remote places. 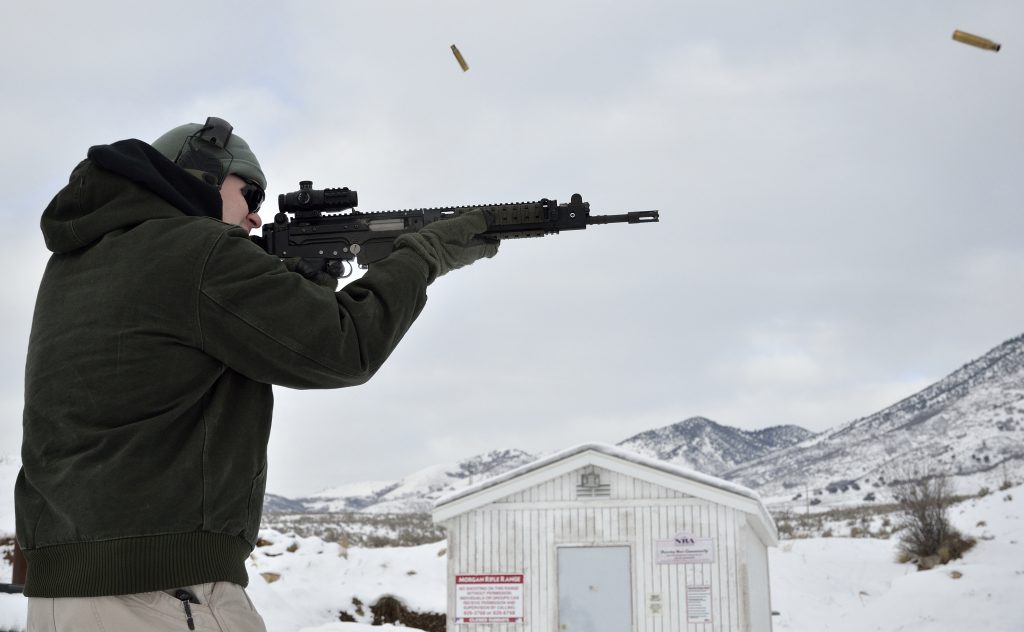 Author Mike Kupari putting some time in on the range. An ardent Second Amendment supporter and enthusiastic shooter, Kupari spent several years as an EOD tech and a PMC contractor before turning to writing full time.

The Free Territories were what became of parts of Nigeria, Chad, and Cameroon, the former Human Sectors. A vast demilitarized zone created by the Treaty of Khartoum, millions of former UEA citizens lived there, since most of their native countries wouldn’t take them back.

An army of UN Peacekeepers, mostly from countries that had stayed neutral during the war, kept the ex-UEA separated from the rest of the population of Africa, lest that continent see more war and genocide.

Kupari, a self-described revolverphile who preaches the Gospel of the FN, is an experienced (though wrong-handed) shooter who uses his experience as a former EOD Technician, PMC contractor, and general retr0-gun-nerd-savant to provide verisimilitude to his writing.

Kupari, has written several novels in the past.

Moving through the deserted streets of Chandler, weighed down by an armor vest, load-bearing gear, a gunbelt, a medical kit, water, and ammunition was harder than it used to be. Tinted goggles and a high-filtration respirator protected him from the potentially toxic dust, but it made it harder to see and breathe. He had to keep going, though. The Feds’ advance was stalled, one of their vehicles was apparently disabled, and they were caught out in the open. If they stayed there, they were all going to get killed.

The gunfire had only been sporadic before, but now it had died off completely. An eerie quiet settled over the ruined city as Nathan moved. There were other structures between him and the target building, but he was alert for movement. The enemy had an opportunity to press the advantage, to counterattack and wipe out the Homeland Security troops. He had to figure out what the hell was going on and tell them to pull back before it was too late.

The Ruffner APCs were only about half a mile from the mobile command center. All Nathan had to do was follow the plume of black smoke drifting up from the street. There was another, smaller one farther away, probably the wreck of the Feds’ helicopter, but he wasn’t

going to go look for it by himself.

The APCs had followed a doglegged path through the streets, keeping themselves out of view of the target building until the last possible moment. That had been smart, for all the good it had done them. It was likely, he thought, that the UEA insurgents had rigged the entire area with sensors and alarms. Hell, they might be watching me right now, he thought,

moving up a dust-covered alleyway.

The alleyway ended at a wide, four-lane, divided street. A row of desiccated tree trunks ran down the center of the divider island. Either side of the boulevard was lined with abandoned cars, faded from years of sun and weather. To his left, just before the intersection, were two

of the three Homeland Security APCs. They were idling, one right behind the other, too close together. The third one, presumably the one that had been hit, had already rounded the corner.

They got lucky, Nathan thought, running across the street.

If the defenders had waited a few seconds, they might have gotten all three APCs into the kill zone.

Breathing hard through the respirator mask, he paused for a moment to catch his breath and check his surroundings. No sign of any UEA insurgents. Keeping close to the empty storefronts, he jogged up the sidewalk, approaching the two stopped APCs from the rear. The vehicle commanders’ hatches were open. Both men had their seats elevated so that they could see better, and saw Nathan coming. He kept his weapon slung and held his bronze badge up as he approached…”

The book is officially described thusly:

Decades ago, the Visitors descended on Earth. They claimed to bring peace and prosperity. Their real goal was the total subjugation of humankind. But humanity did not give up its only home without a fight. After a devastating war, the Visitors were driven back to Mars. Their millions of willing human collaborators were left behind. The task of hunting down these former alien collaborators and bringing them to justice falls to Federal Recovery Agents like Nathan Foster.

Now, Nathan Foster is tasked with bringing to justice Emmogene Anderson. As a teenager, Emmogene was experimented on by the Visitors and implanted with a device that allows her to control other people. With her is her obsessive ex-lover, who was also a former commando of the Visitors’ forces. It’s an easy enough job—but Emmogene has been implanted with something else, something much more important.

Nathan and Ben must decide what is right in a largely lawless world— and the fate of the planet hangs in the balance.

“I started writing in high school. I didn’t really get into it until college when I began writing fiction online. I never seriously considered trying to be a novelist, though, not until 2006. That was the year I met Larry Correia. He liked a story I was writing online and asked if he could jump in on it. That story ultimately became DEAD SIX.

I lived in Doha, Qatar for a year, while working security at a US installation there. Qatar ultimately became the inspiration for the fictional country of Zubara.

Later in life, I served as an explosive ordnance disposal technician in the US Air Force. I deployed to Afghanistan and applied that experience to my second book, Swords of Exodus.

My first solo novel, Her Brothers Keeper, wasn’t exactly inspired by real life. I am sad to admit that I’ve never captained a privateer rocket ship. I do, however, have a lifelong love of science fiction and space opera and am excited to continue sharing my take on different genres.”

Mike Kupari is the author of the debut science fiction novel Her Brother’s Keeper, as well as the co-author, with Larry Correia, of the best-selling Dead Six military adventure series including Dead Six, Swords of Exodus, and Alliance of Shadows. He is a relatively active prolific freelance writer, having contributed to Breach-Bang-Clear, The Mag Life, and other publications over the last several years. Mike grew up in Michigan’s Upper Peninsula and enlisted in the Air Force at the age of seventeen, deploying twice as an Explosive Ordnance Disposal tech. He went on to serve six years in the Army National Guard and spent several years both at home and abroad as a security contractor with a PMC. He now lives in the northern tier, bemoaning the price of ammo, arguing with a truculent parrot, and filling in DFPs (complete with grenade sump) dug into his yard by a recently adopted canine.

You can find the book on the Baen website or in Amazon.com’s book section.